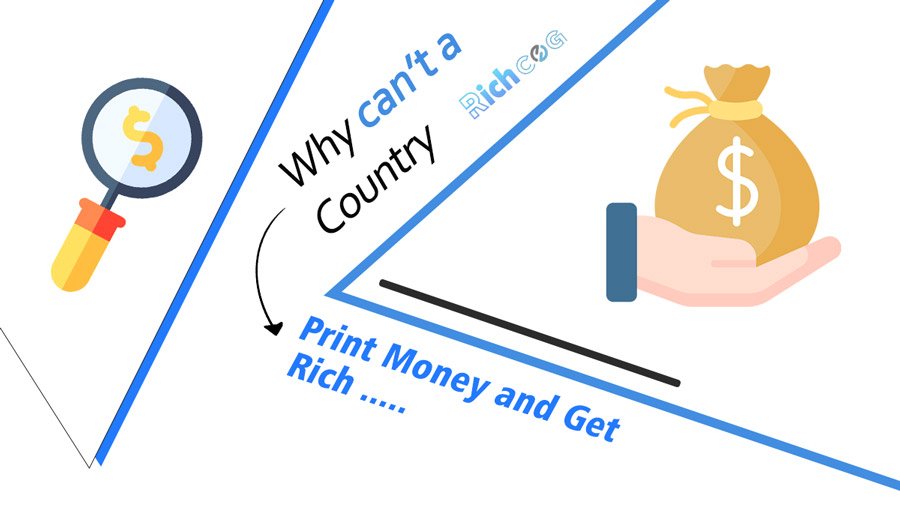 Why can’t a country print money and get rich? Everything You Need To Know

If you are then don’t worry we’ll provide you with every possible information we can so stay till the end to become a little extra enthusiastic about economics.

The main reason that any country can’t print as much money as they want is because of inflation or maybe hyperinflation. They know the volume of money in circulation is only for the available products within the marketplace.

Otherwise, they will be in trouble just like it was in Zimbabwe in 2008 which we will talk about later in this blog.

And if you are wondering about Hyperinflation?

Then It is an extremely rapid growth of the inflation rate, usually caused by an increase in the money supply, which happens mostly by printing a lot of money than the country needs.

Which country print money in the world?

The main issue with printing out more money than usual is an increase in the inflation rate.

Let’s take it this way: We know everybody may have paper money, but the supply of vegetables has not increased.

The main problem is by printing more money is that the price of the available vegetables goes up, as the seller will want to sell to the person who wants to give the most money.

When the seller wants to go to the bank to deposit the cash, he may find that transport has also gone up, since the number of taxis has not increased.

When a taxi driver then goes to buy fuel, he may find that fuel has also gone up, since there has not been an increase in fuel supply.

Fuel seller goes back to the market to find that vegetables have gone up again this week and more in the next week.

As this cycle goes up and up, Then you’ll end up facing a similar situation just like in Zimbabwe. 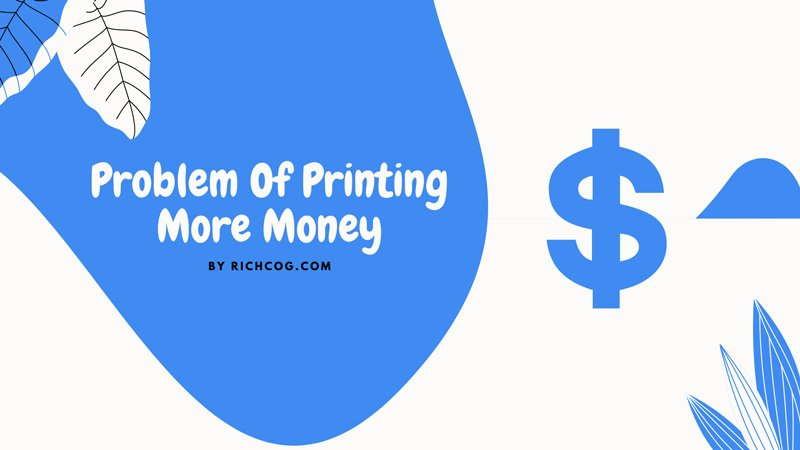 Another issue of why not a country print money and get rich is because that we cannot fool the world into loaning us money if we’re not making ourselves more productive or making things valuable.

This is the privilege of some countries which has the world’s trading currency, but arguably that position has been earned over the past century.

Now, if you’re in that country, and you feel like pumping your contracting economy (saving the world’s of the economy from collapsing) by increasing the money supply rate.

You’ll find that there are people who will buy your promise for a small fee (interest), based on your previous history of paying/honoring your promise over time.

Let’s dive a litter deeper into this topic because I thought that you are becoming more curious.

Can the government print as much money as it wants?

When I was in college most of the time I found myself asking these types of questions all the time, the fun part is with the same dilemma at the back of my mind, can a country print as much money as it wants and become richer than others?

Still, a lot of people think that government can print money depends on the gold backups they have, but the reality is, It is one of the biggest misconceptions of the people.

The one thing about printing money is yes any country in the world can print currency as much as they want, you don't have any, limitation on it.

In a recessionary gap, countries do resources to printing money, which is basically called "Quantitative Easing".

The basic fundaments and common cause that no country should print as much money they can because of  Inflation sometimes also Hyperinflation, which directly affects on countries economic capital.

I know you get the point why can't a country print money and get rich but most of your mind went into what is Inflation mean?? Don’t worry, I’ll explain it the easy way, and if you want to know about money and inflation relationship in deep you can check out our article. 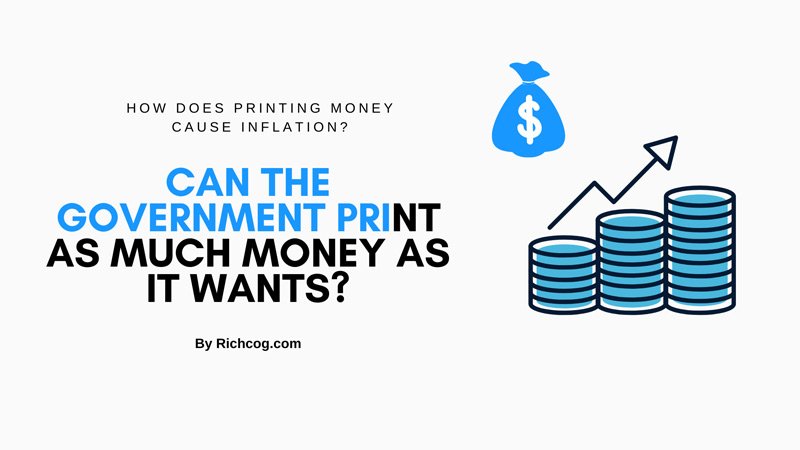 All right, we don’t care about the definition if that is your case check out this article: money and inflation relationship

We will directly jump into the real-world case scenario, which we have faced in our childhood.

Do you still remember our grandfather use to say that “In our time, we use to buy many things with a very little amount of money” I think most of you remembered, right? even though you are also going to say the same thing to your child. 😂😂

Now think with your own mind what might be the reason that your grandfather’s time goods and services cost way more now as compared to that time? The reason is Inflation.

Let’s do some workout about inflation don’t worry you don’t have to do a bench press or any kind of sit-ups. 😋 just sit comfortably I will tell you everything about inflation in an easy way of understanding.

Can a country print as much money as they want?

Assume you have created and manufactured a smartphone and you want to sell it for $100, and no one is having it in the first place.

In general, as the demand for your product is high you’ll raise the price to $150 (suppose).

[X] customer will lose the offer right away, now only [Y] customer & [Z] customer have a chance to buy, but now those two customers are demanding again you’ll raise the price from $150 to $200. Now only the [Z] customer will be able to buy it right?

The important thing about this example is you can notice that the smartphone has to be sold for $100 but end up selling it for $200. That’s an Inflation. 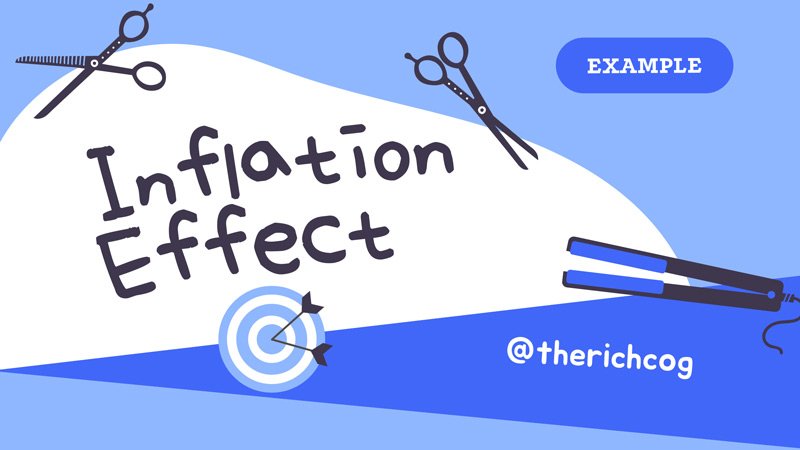 If you want to know the short and easy definition of inflation then It is a constant increase in the price of goods and services than the day before.

Ok, you already get the basic view on inflation, now the point is what is the relation between inflation and printing a currency?

The main cause of inflation is the increasing amount of cash flow in the country and that happens if you print a lot of money.

When you print more money then people will have a lot of money to spend what they want to buy for themselves for example if you are using old car right now and when you get a lot of money then you probably not gonna use that old car anymore you might gonna buy a new one.

That causes high demand for goods and services because people have a lot of money to spend and the price will go higher and higher, cause of demand on products and essentially effects on the economy because of the inflation sometimes more called hyperinflation.

Have you noticed when a country’s inflation rate goes too high, the banking systems of that country like the Federal Reserve in the U.S. or any other bank s in that country raises its interest rate much higher to decrease the money flow in the nation.

These results protect buying more goods and services because there is not much cash flow in the nation and stops from Inflation.

If you didn’t raise your interest rate then everyone wants to rent money from the banks and use that money on buying a lot of goods & services and demand goes up, prices go up and happens Inflation.

This is the main reason why can’t a country print money and get rich anyway.

How much money government should print?

If you are thinking about how much money a country should print to balance the economic pattern so they can negotiate things?

Now imagine any country produced only 1 kg banana in a year and you know that the country has a right to printing as much currency as they want.

The main difference between these two circumstances is nothing but we have eighter $100 or $300 to buy that 1 kg banana.

This is just a basic aspect of the role of money in the country and the government only prints the right amount of money to circulate for goods and services delivered, which balances the economy.

In what basis money is printed in a country?

The fun part about the answer is there is not an exact thing that determines the amount of money that the central banks prints.

The government print only money which should be enough to circulate for goods and services well and also keep up the value of the currency.

The value of the currency is based on different things like Current and fiscal deficit, net exports, Bank interest rate, and more.

Usually, the central banks print around 2-3% money for total GDP. However, the substance of money diversifies a lot from economy to economy.

But some emerging countries like India print and already had more than 2-3% money in circulation.

Fraud money plays a big role in money flowing in the country and hence the amount of currency free in the legal channel.

Yes, they can print as much money they can, but look at the example of the Zimbabwe hyperinflation case in 2008 what was happened there, when a whole country tries to get richer by printing more money, it rarely works.

Because if everyone has more money, prices go up as demands of goods and services and everyone find that they need more and more money to buy the same stuff.

This happened in Zimbabwe, Africa, Venezuela & South America, when they rapidly printed a lot of money trying to make their economies grow.

When printing speeds up and prices go up, these countries started to form hyperinflation. That’s when prices rise by an unusual amount in one single year.

In 2008, when Zimbabwe was hit by hyperinflation, prices went as much as 231,000,000% higher just in a single year. Imagine, a portion of food that cost 1 Z$ before the hyperinflation would have cost 230M Z$ a year later.

That is an insane amount of money, which means you need a bucket of money to buy one water bottle. what?

The only way to be rich and grow the country's economy is to produce more goods and services and sell them.

Which makes it fairly safe to print money currency so the people can buy those newly produce things.

So you already got the answer of why not a country print money and get rich or can the government print as much money as it wants.

Take a look at this example — If the bank would now start printing money desperately without backing it up with anything, that piece of currency would be useless and when it is used as a medium of exchange would be a plain deception, and that 'forged' currency used over and over again multiple times would soon disrupt the whole economy of that country.

But in the case of the US Federal Reserve, it doesn't apply, where banks do earn interest on money they can create out of thin air.

Disclaimer: The information you'll get on this article is well researched, but we still don't recommend you to directly relay on, what information we're providing to the readers.